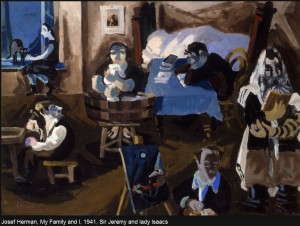 Salaam Shalom have a limited number of invitations, which provide free entry on the opening evening of Tuesday 8th May. Please email studio@salaamshalom.org.uk if you are keen to attend.

Josef Herman: Warsaw, Brussels, Glasgow, London, 1938-44 follows Herman’s tumultuous journey as he fled across these four European cities in six dramatic years.
It brings together for the first time much of Herman’s surviving work from this formative period, when his art was at its most experimental and his use of colour strikingly imaginative.
Most of it is held in private collections and therefore rarely seen, and has never previously been gathered together on such a comparable scale.

Included are the few remaining works from Brussels, a series of powerfully expressionist figurative works in oil, gouache and tempera, striking designs for a politically-themed masque and a ballet, and many works on paper from the series known as the ‘Memory of Memories’.

These vivid, often poignant, sketches fired by memory and imagination, carried out in Glasgow between 1940 and 1943, bring the memory of Herman’s family (who perished in the Warsaw Ghetto), as well as his lost Warsaw years, back to life.
The exhibition also includes examples of work by Herman’s contemporaries in Glasgow: fellow Polish émigré Jankel Adler, Estonian-born sculptor Benno Schotz and Scottish colourist J D Fergusson, alongside whom Herman briefly made a considerable contribution to the Glasgow arts scene.
In London (1943-4), particularly at the Ohel Centre, Herman mixed with fellow artists Martin Bloch, David Bomberg, Jacob Epstein and Ludwig Meidner (whose work is also included), as well as with the poets Itzik Manger and Avrom Stencl.
The exhibition concludes in mid-1944, when Herman’s momentous discovery of the Welsh mining town of Ystradgynlais in South Wales changed the direction of his life and work forever.
The exhibition was curated by Ben Uri: The London Jewish Museum of Art and is part of Ben Uri’s continuing exploration of and commitment to the work of émigré artists.

Curator’s Tour
Tuesday 12 June, 4-5pm
Curator Sarah MacDougall will be leading a special tour of the exhibition examining
Josef Herman’s tumultuous journey as he fled across these four European cities in six dramatic but little-known years, against the backdrop of the unfolding Second World War. Sarah is the Eva Frankfurther Research and Curatorial Fellow for the study of émigré artists.
Free with exhibition entry ticket. Booking advised.

Curator’s Talk
Tuesday 12 June, 6.30pm
In this talk, curator Sarah MacDougall explores Herman’s rare surviving work from this formative period when his art was at its most experimental and often strikingly colourful. The talk describes Herman’s discovery in 1944 of the tiny mining village of Ystradgynlais in South Wales, where he made his home for the next eleven years and went on to create the monumental studies of miners which were to make his name.
£5. Booking essential.

Family Workshop
Saturday 26 May, 10am – 12pm
This interactive workshop brings the exhibition to life for children and families. We will talk about journeys you have made and where you and your families are from echoing the exhibition themes of travel and Herman’s personal journey. You will then work as a family to make and decorate your own suitcases with personalised luggage labels.
£5 per child, includes admission to exhibition. Booking essential.