To learn about the background to this blog post and other posts from Sonia, please click on the link above.

Salaam Shalom are supporting Sonia Black, a British student, to volunteer with Project Harmony in Israel this summer (2015). 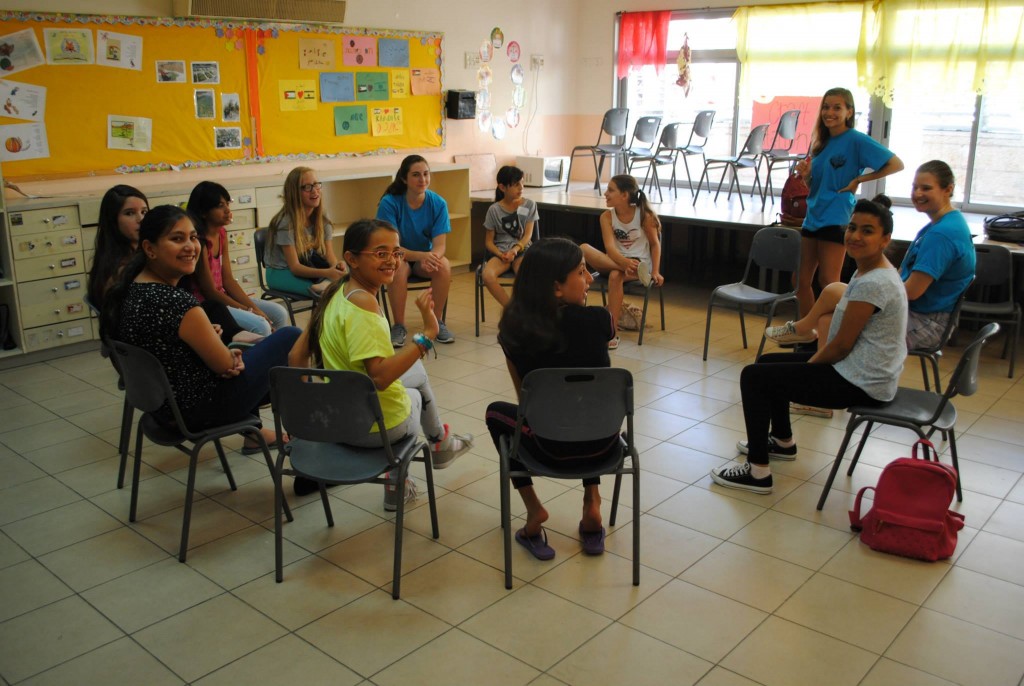 This summer, Project Harmony’s last day of staff training coincided with the final day of the school year for the children of the Hand in Hand Bilingual School. Like all children, they were full of anticipation and excitement for the end of term – excitement which ended abruptly when they arrived to find hateful anti-Arab graffiti spray painted across the school walls. It was far from the first time the school had been the target of racist vandalism – as well as the all-too-frequent graffiti, several classrooms had been destroyed in an arson attack in November 2014 by the Jewish right-wing anti-miscegenation group ‘Lehava’. This time there may have been no fire, but the walls bore slogans now familiar to the children, such as, “There is no coexistence with cancer”, and “Arabs to the slaughter”.

The aim of such graffiti is not only to intimidate the school’s children and staff, but also to foster the sensation of difference between the pupils. Hand in Hand and the summer programme held within its grounds, Project Harmony, serve as a bubble of coexistence within a deeply divided society. It is a place in which the children switch between Hebrew and Arabic with ease. On the first day of camp, a coworker and I noted that without knowing the names of the students or the neighbourhoods in which they lived, it would be difficult to differentiate which children were Jewish and which were Palestinian. To these children, shared ethnicity is not a prerequisite to friendship. They enjoy the same sports and sing along to the same songs. When they make friends it is because they enjoy each other’s company, and though they may have disagreements, they have everything to do with being children and nothing to do with religious identity.

The vandalism to which the school and its pupils are subjected is an attempt to burst this bubble of coexistence. It attempts to create a sense of division which anyone who steps inside the walls of the school can see is not naturally occurring. It presents “Jew” and “Arab” as mutually antagonistic categories whilst aiming to impose the idea upon them that this is due to the inferiority of the latter. It tells the children that even though they may see each other as equals, the outside world is waiting to inform them that they are not.

At Project Harmony, despite our best intentions, we cannot shield the children from attempts to divide them. On one occasion in which we visited the park adjacent to the school, children from a nearby camp questioned whether they were “Arabs or Jews”, then informed them abruptly that they had no interest in speaking to the Arabs within the group. The children later found that offensive comments about Palestinians had been chalked onto the grounds of the park. Moments like these serve as a harsh reminder to the campers that the idea of coexistence, which to them comes so naturally, is something which many refuse to understand or tolerate.

However, these moments also allow the children to demonstrate the power of their resolve and their commitment and support for one another. That day in the park, the Jewish children of Project Harmony were outraged on behalf of their Muslim friends. The deep sense of loyalty and compassion among the campers is apparent, and they would not consider returning to their activities until they had washed away the chalk – together. When the students of Hand in Hand arrived to racist graffiti on their last day of school, they immediately began preparing their own signs to hang over the offending statements – signs which read: “Jews and Arabs refuse to be enemies”.

“>As staff responsible for the campers’ wellbeing during the summer, it is instinctive to want to protect the children from the harsh realities of the outside world. We want to create a safe space in which Jewish and Palestinian children can be themselves without having to worry about ethnic and religious division, and when that safe space is disrupted it is easy to feel as though irreparable damage has been done. What the children have taught me already is that they have far more resilience and determination than I thought was possible. To them, coexistence isn’t optional – it’s their answer and it is one in which they believe wholeheartedly. Attempts to intimidate them only further unite the children and strengthen their sense of community.

Today, as he was sentenced to two years and a half years in prison for setting fire to the school, one of the Lehava arsonists stated that “the price [of his actions] were worth it”. It seems he has underestimated the children he is up against.