We have a very special evening planned with the Palestinian musician Rasha Nahas and British Israeli Producer Mark Smulian.

Rasha’s unique background as a Palestinian artist growing up and developing her art in the heart of Israel/Palestine, has empowered her to focus on the reality of the world that surrounds her, bringing the social and political issues that directly impact on her life into her music, creating unique and poignant songs that reflect the upheaval and tragedy that is today’s middle east from her point of view.

Singing in English and deeply influenced by Folk, Rock, Jazz, Classical music, Flamenco and naturally Middle Eastern music, Rasha delivers her songs with a simple and heart touching simplicity reminiscent of some of the great folk artists of the past 50 years.

Rasha is accompanied by Mark Smulian, the Israeli musician and producer she is working with. Mark Smulian was the founding band member of the ground breaking White Flag and has both Platinum and Gold record credits to his name.

Food will be available to purchase from La Ruca cafe. 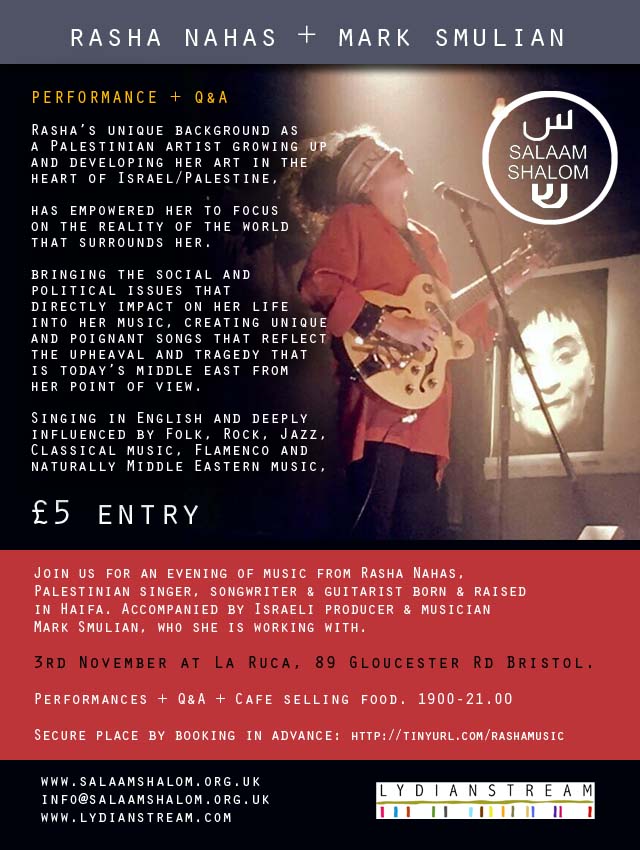