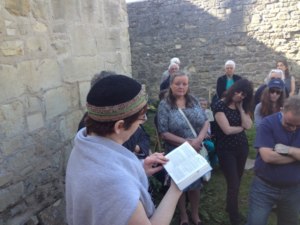 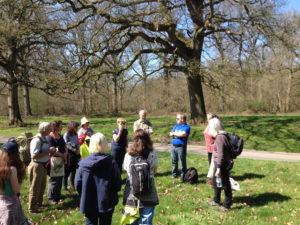 Forced Walks: Honouring Esther is an artist-led walking project working with the testimony of the Yiddish actor, Bundist and anti-fascist activist, Esther Brunstein. Esther made it though the Lodz Ghetto and Auschwitz, she was liberated from the infamous concentration camp at Bergen-Belsen to Sweden in 1945. This project begins with the death march she survived in February 1945 from a slave labour camp near Hannover into Belsen.

The opening phase, a 2 day walk in Somerset, was completed in April 2015 on the 70th anniversary of the liberation of Belsen.

The artists are now preparing the walk for Germany in February on the actual route of the death march. They intend to create a live networked stream from the walk, revealing stories and sharing thoughts and connecting on contemporary human rights issues. Richard and Lorna invite others to join them, to walk, to help network the project and participate online.

“Winter closes in on refugees crossing Europe, tragic events in Paris and under reported terror attacks elsewhere force us to think about the world we live in and the world we want to live in. Our energies focus on the ‘Honouring Esther’ walk in Germany: from repatriating memory to reconciliation to solidarity. In making this walk and sharing it with the world we want to contribute to reversing the spiral of fear and hate”

“In the face of blood and fear and bullets we believe that this is the time to be making gestures of love and solidarity; reminding ourselves of the values of internationalism and human rights.” Richard White and Lorna Brunstein